I ran across a recommendation for this book Beautiful Oops! one day, and had to check it out after reading some of the comments written about it.  While flipping through it at the book store I fell in love, and scooped it up for my son immediately. 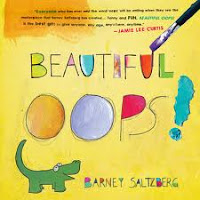 This very simple read is a pop-up book, illustrating what you can do instead if you make a mistake while working on a creation.  One of my favorite pages turns a torn piece of paper into the smile of a crocodile!

Each page is a wonderful lesson in thinking outside the box.  It can be used as a conversation starter for children who get frustrated easily when something doesn't turn out as expected with their art.  I feel it could also be used for other, "What can you do instead?" situations in a child's life.

We've had our own mistakes with projects of course.  Aidan and I recently worked on a road map for his cars using a shower curtain.  Many of objects that ended up being drawn on the map reflected things in our neighborhood.  When he told me he marked an area that he didn't really want to be marked, I suggested we try turning it into a pond.  He eagerly began coloring blue shapes over his mistake, and added more ponds as well.  Cranes were requested to be put in near the ponds after that (there are three cranes that roam our neighborhood).  Other familiar landmarks in our area began emerging on the map as well.  We took what he felt was a mistake and turned it into a trail of other things that may not have made it on the road map in the first place, without giving up on it, or melting down. 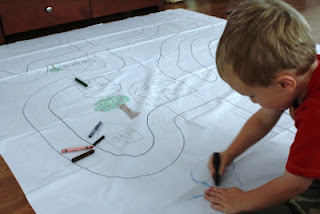 I try to prompt Aidan to think about what can be done instead when an "oops" occurs, to help him learn to cope with those times when he feels like something can't be done.  Empowering him to come up with a solution on his own, or even reminding him that he may already know what to do, is a life skill that needs practice, and is something I will always be willing to help him develop.  Heck, as a parent, I make mistakes all the time. I try to think about what I could do instead everyday...maybe this book was meant for me, just as much as it was meant for Aidan, now that's a Beautiful Oops!