Boys and their favorite toys

A favorite toy can be spotted when it gets played with everyday for hours on end, worn down and beaten up from repeated use.  For my son Aidan that toy is the car, a popular choice besides the typical block and stick play we tend to see boys choose.  He brings them all over the house with him and they are usually the toy of choice to bring along when we leave the house for appointments and errands. 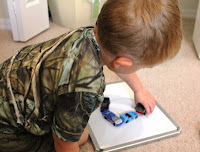 Taking advantage of a favorite toy when expanding on something a child is learning is a great way to follow their lead or interests during play.  Aidan was in his room digging through his large assorted box of cars, trucks, planes, and motorcycles and asked if I wanted to drive and park cars with him.  As we sat on the floor dividing up cars between the two of us and placing them in certain areas he had designated he suddenly exclaimed that he made a letter with the cars.  I noticed a shape that took the form of a letter A and told him what I saw.  Quickly I grabbed a dry erase board and drew a different letter.  He recognized the letter O and I showed him how I could park cars on the letter.  We proceeded to park cars on a few other letters I drew, then I changed it up a little and tossed out some magnet letters. We parked cars by the first letter in their name, such as T for the tractor.  This was even more exciting to him because he was able to attach a letter to something that was familiar to him, like he does every time he sees the letter A, because     it is the first letter in his name. 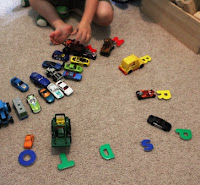 Combining things that are familiar and valuable to children when introducing letters, numbers, or shapes keeps them engaged and interested, but these things can naturally happen on their own too.  Aidan suddenly needed a couple drivers and pulled out two action figures.  He laid them down next to two different cars with similar colors on them while telling me that "the blue car belongs to batman because he is blue, and the red truck is for spider man because he has red on him."  Typically, sorting objects by color is the very first thing a child does when organizing their world, afterward size and shape come along, an important form of early math that many don't recognize when they see their child doing it!

We engage in this type of play everyday.  I'm not saying all we do is play with cars and focus on letters; I try to follow his lead, noticing what he seems interested in that day.  Then "magically," he soaks up other knowledge in a fun way that  he will eventually recognize on his own.

One more thing, that moment of car play wasn't just about sneaking in a little letter recognition but also a memory I hope he looks back on and thinks, "My mom loved spending time doing things I loved with me."
Posted by Unknown at 7:04 PM