Aidan loves experiments.  He makes them up a couple of times a week.  Sometimes, it's just a bucket of water in the yard, with a concoction of leaves, dirt, and grass he's collected, that he says will catch bugs or lizards.  He's also taken leftover dough from a baking project, stuff it into an empty cardboard tube, close the ends with tape, sprinkle it with flour and water, then ask to spray my husbands expensive "camouflage" on it, so that he could take it into the laundry room to see if it would glow in the dark!  It took me a few minutes to figure out what camouflage was when I realized he'd forgotten the name cologne! 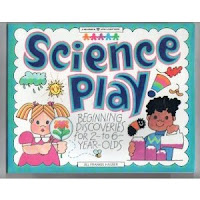 We checked out a book from our local library with simple preschool science exploration ideas in it, which is where we found our experiment!  A boy who loves to eat a handful of marshmallows for dessert, and has known since the age of eighteen months that camping will lead to roasting marshmallows over the fire, did not hesitate to take this project on!  The marshmallow experiment was extremely simple and really got Aidan thinking, because the outcome was not what he expected.  Unexpected outcomes are my favorite, for the simple reason that it creates more of a discussion with him. 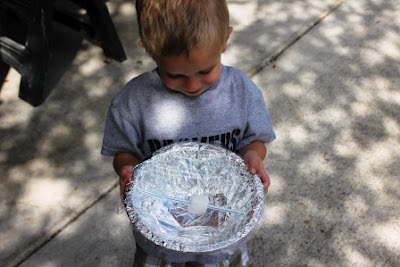 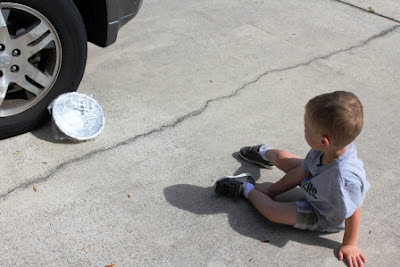 The bowl was like a homemade oven. We talked about how hot the sun gets like an oven as we laid it at an angle outside.  This was to make sure the inside of the entire bowl was getting sunlight.  I asked Aidan what he thought would happen.  He said, "I think the sun will catch the marshmallow on fire!"  I thought the marshmallow would puff up a little bit.  We waited about 15 minutes as the book suggested.  There were no visible changes, so we decided to let it sit a little bit longer.  After waiting another 20 minutes we checked it again, still no visible changes. 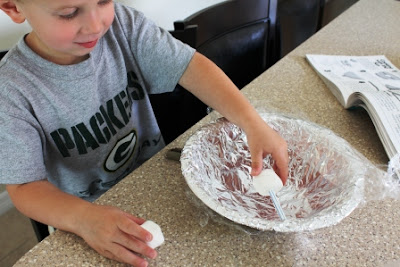 We decided to open it up any way and check.  The marshmallow had changed, in texture!  It felt rougher on the outside than a marshmallow fresh out of the bag. 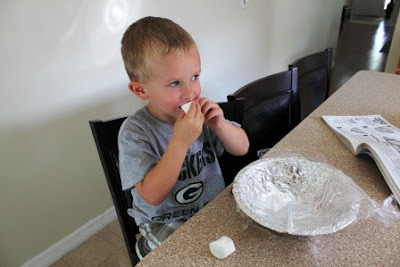 Aidan did a taste test, the marshmallow that cooked in the sun tasted different too! 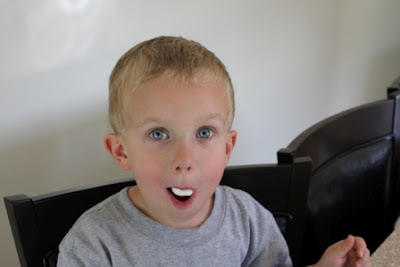 Both of our conclusions were wrong, but it was a delicious experiment and it led to conversations about other things that get hot in the sun, like the car, and the playground equipment at the park.  Now we need to find some other cooking in the sun experiments, which shouldn't be too hard to do with the intense Florida sun here!  Do you have any tasty recommendations?