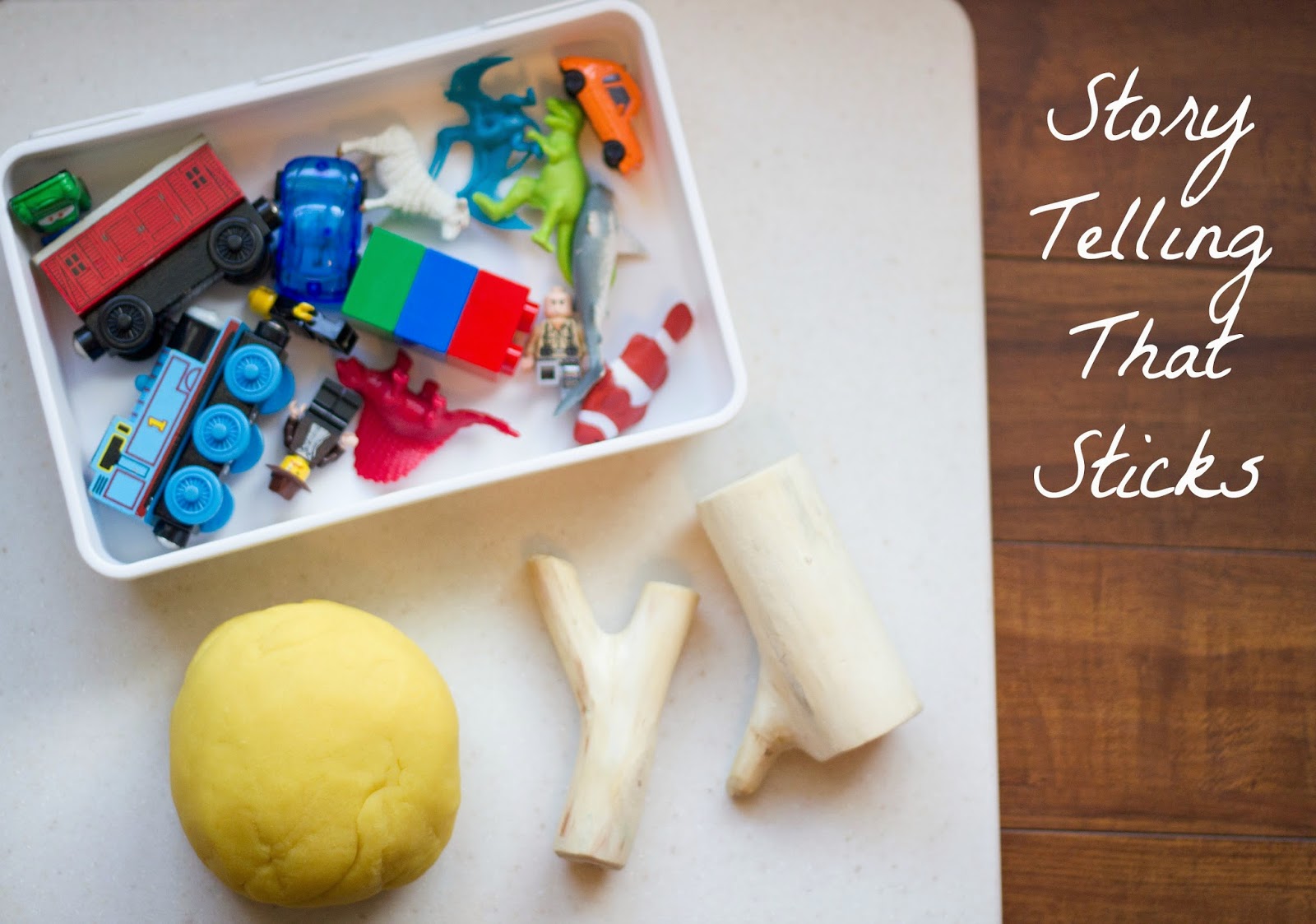 "Great stories happen to those who can tell them." -Ira Glas

We live in a world ruled by stories; stories told on the television, at the movies, in picture books, through photographs on the wall, or on the crayon covered paper drawn by little hands.  My favorite stories are the ones told at the dinner table, in the car, or on a walk in the woods.  Stories connect us to one another, entertain us, and help us relate to concepts in life.

One of my favorite story tellers is my two year old son.  With the most expressive face he spins tall tales that are usually peppered with real life events, and a funny character or two.  He seems to have the makings of a future author, but I'm biased of course.

One of our re-occurring favorite stories (in picture book form), and loved by my seven year old as well for its silly plot, is one of Oliver Jeffers' stories, Stuck.

"A tale of trying to solve a problem by throwing things at it." -Oliver Jeffers

I've written about my "crush" for Oliver Jeffers picture books before here.  His story telling has a strong hold on us....you could say we're stuck on them!

We were reading and talking about Stuck one day when my older son was home sick from school.  We had also cooked up a fresh batch of play dough and pulled out our tree blocks.  It struck me later on that afternoon that we had an opportunity for story telling right in front of us.

I smashed some of the play dough down so there was ample surface area for our stories, and laid a tree block next to it so it had the appearance of  a tree.  Then I grabbed a container and filled it with small random objects and toys...the best kind of props for story telling. 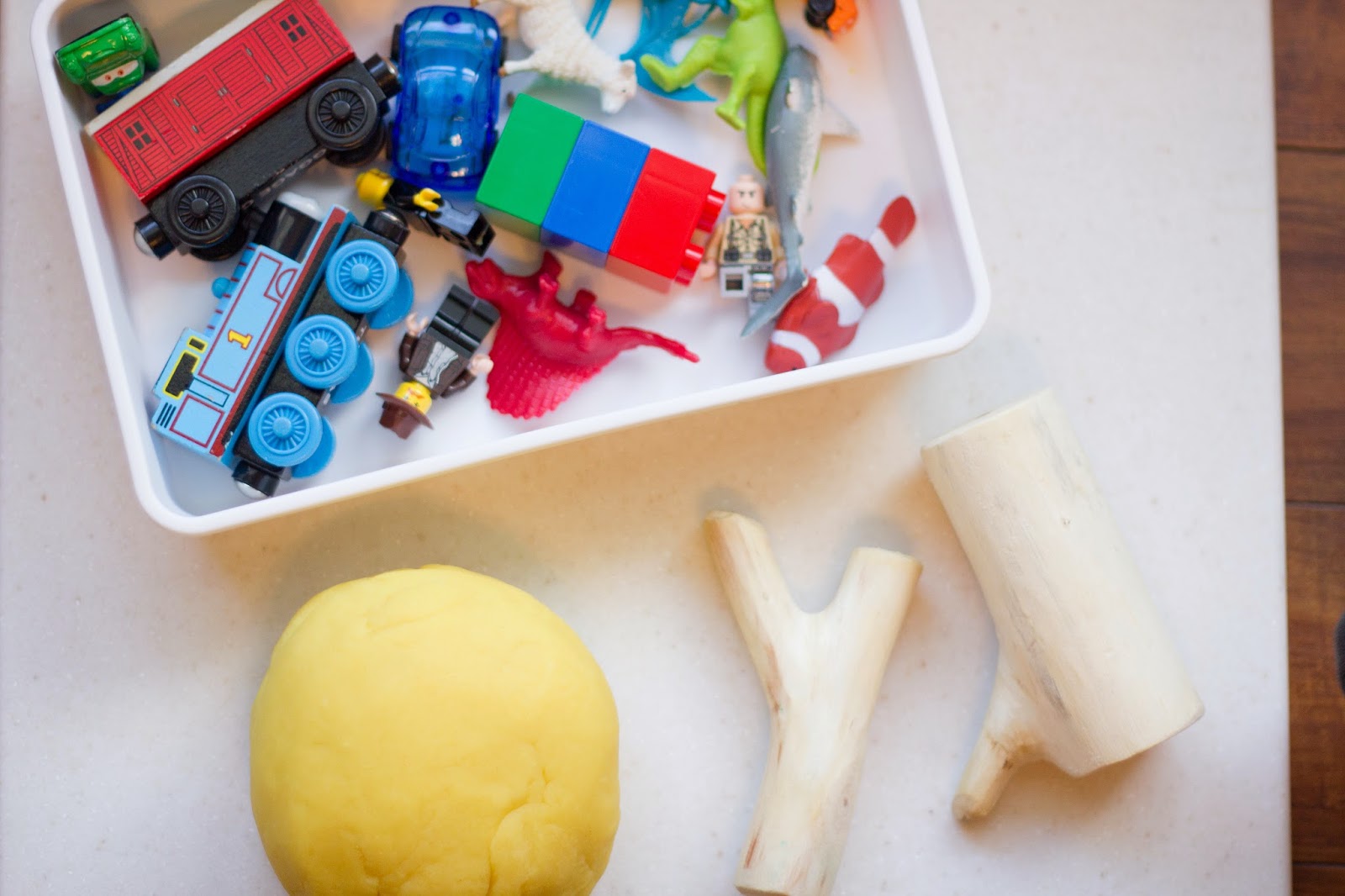 I simply asked my boys to tell me a story with the objects in front of them.  My seven year old eagerly began to work, and the two year old followed his lead. 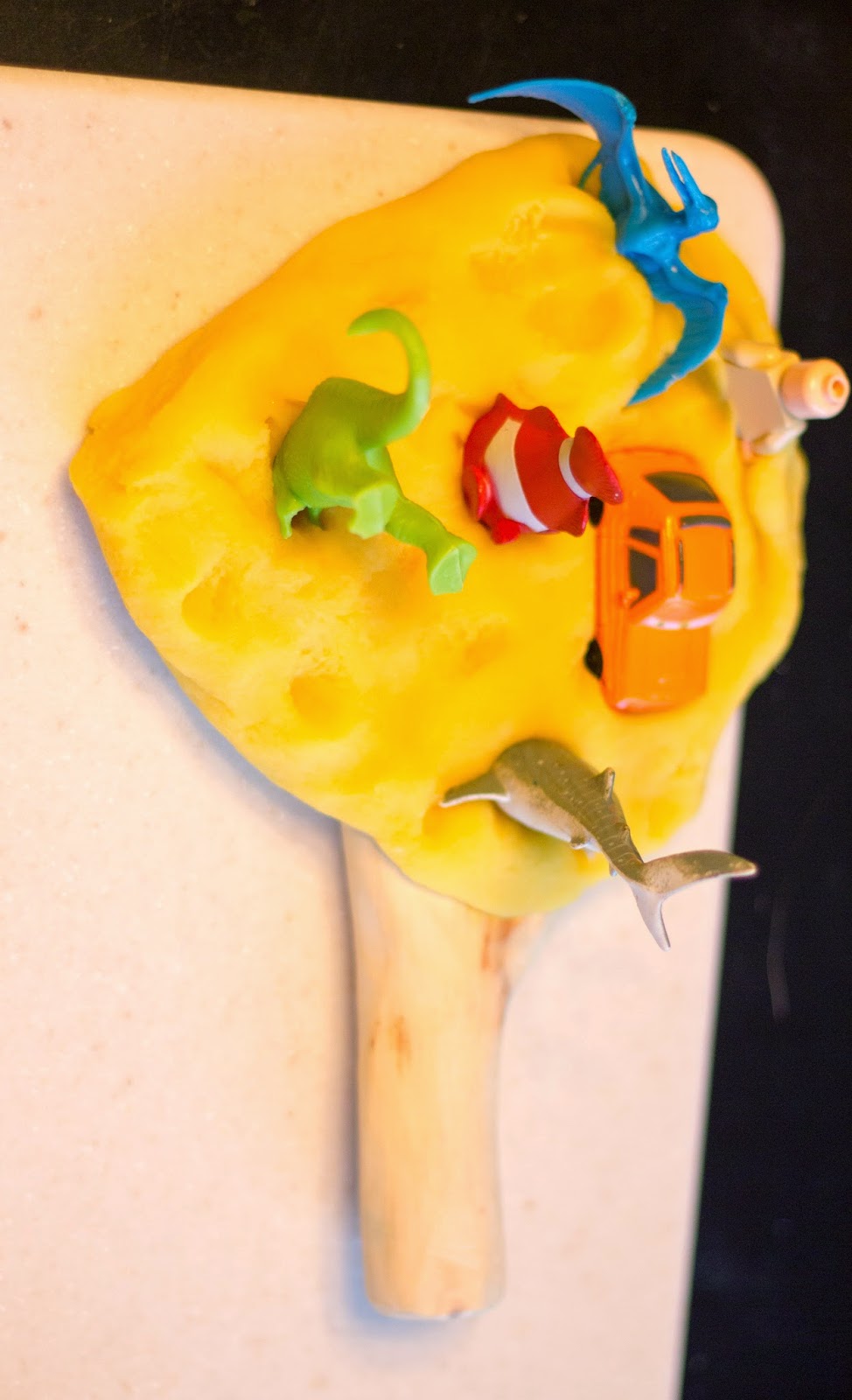 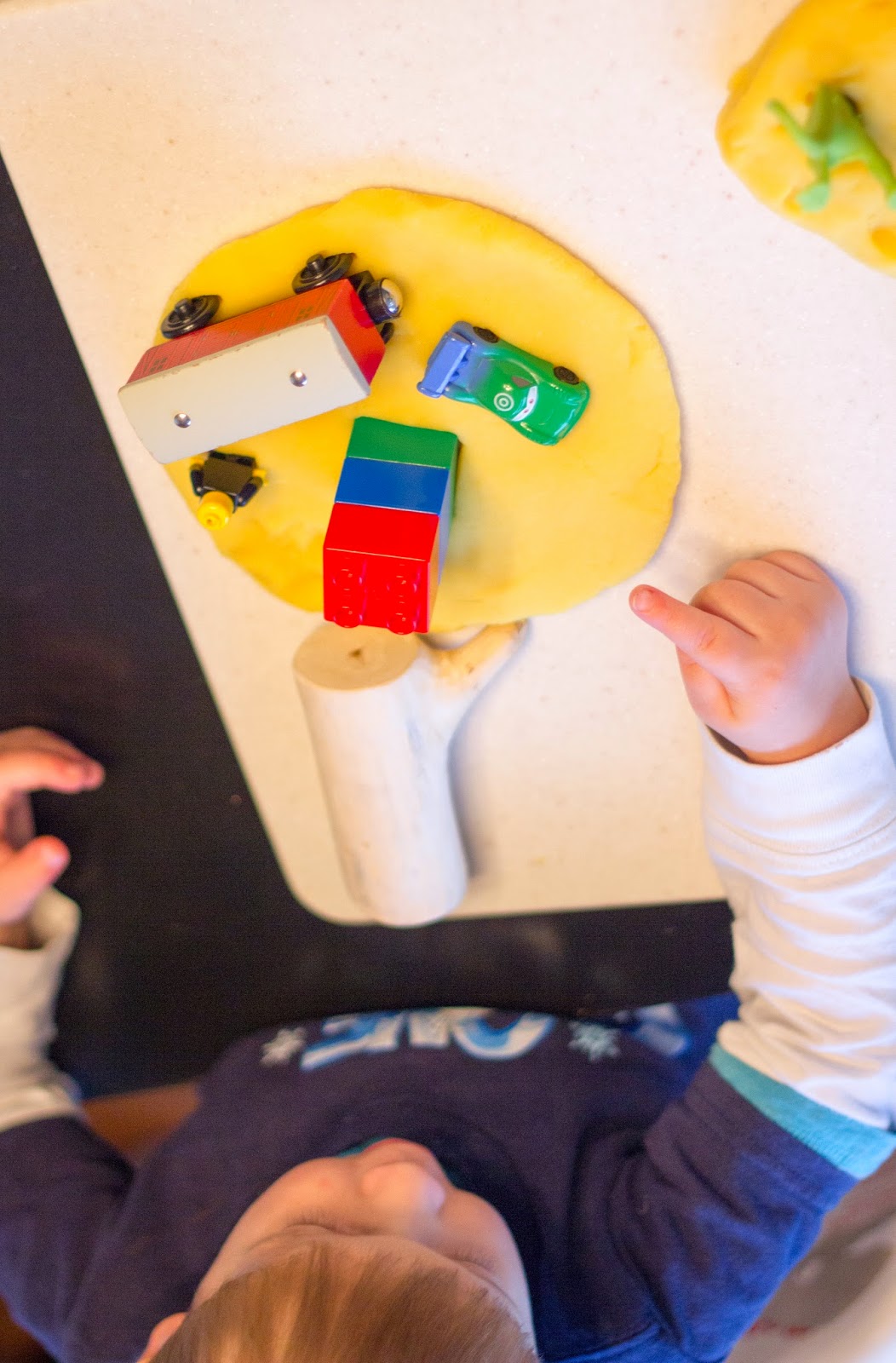 It did not take very long for the room to be filled with tales of... "I threw my fish into the tree because I wanted to see if it was a flying fish, then I went back in time in my time machine to get a dinosaur to throw into the tree to knock it down, it was still stuck, so I threw...."

My younger son told simpler versions, "I throw Lego to knock train down.  I throw car to knock Lego down."

They told, and they re-told, and kept on telling.  It was a great sequencing and recall activity.  They changed the objects and shared their own stories over and over...it was sticking with them. 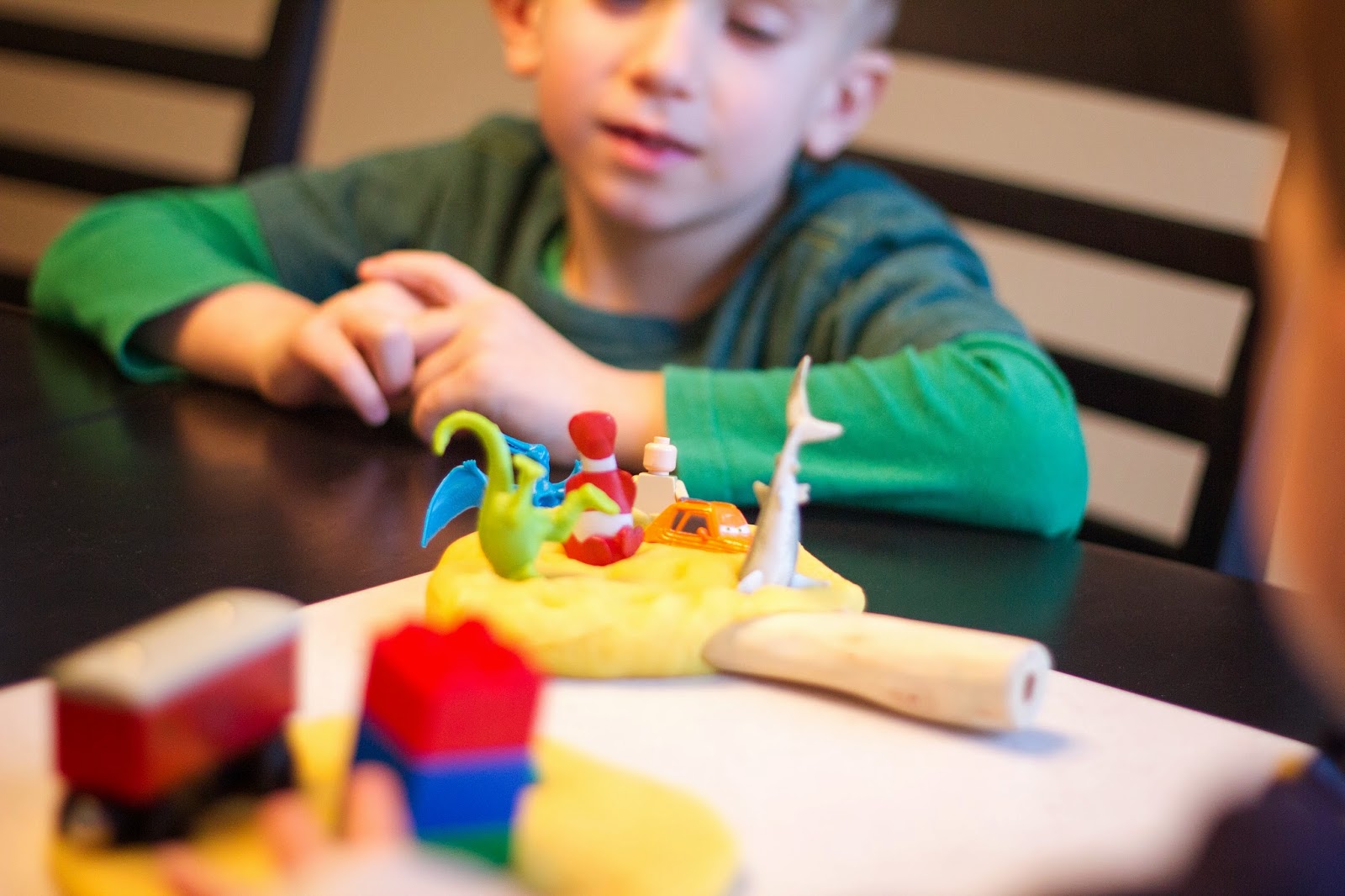 What favorite story telling methods seem to stick with your kids?  Please share your stories below!

Stay up to date on all our Little Moments and more; like our facebook page, or join us on Google+!
Posted by Unknown at 12:30 PM